These are the selections by the editors at The Times Book Review as the best fiction and non-fiction titles for 2021. 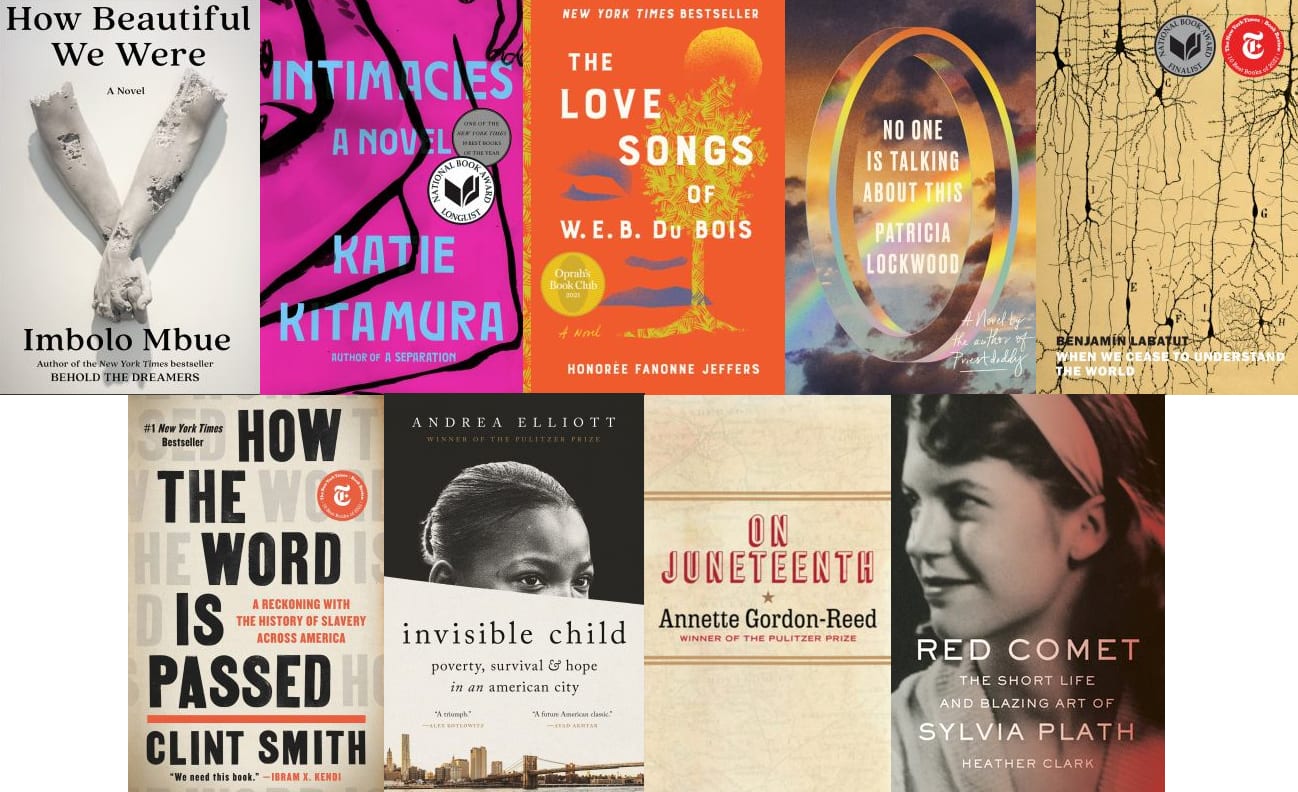 How Beautiful We Were, opens a new window by Imbolo Mbue
Fiction
Set in the fictional African village of Kosawa, it tells the story of a people living in fear amidst environmental degradation wrought by a large and powerful American oil company.

Intimacies, opens a new window by Katie Kitamura
Fiction
A ... story about a woman caught between many truths. An interpreter has come to The Hague to escape New York and work at the International Court. A woman of many languages and identities, she is looking for a place to finally call home.

The Love Songs of W.E.B. Du Bois, opens a new window by Honoree Jeffers
Fiction
Ailey is reared in the north in the City but spends summers in a small Georgia town, where her mother’s family has lived since their ancestors arrived. From an early age, Ailey fights a battle for belonging that’s made all the more difficult by a hovering trauma, as well as the whispers of women–her mother, her sister, and a maternal line reaching back two centuries–that urge Ailey to succeed in their stead.

No One Is Talking About This, opens a new window by Patricia Lockwood
Fiction
Is there life after the internet? As this urgent, genre-defying book opens, a woman who has recently been elevated to prominence for her social media posts travels around the world to meet her adoring fans. She is overwhelmed by navigating the new language and etiquette of what she terms “the portal,” where she grapples with an unshakable conviction that a vast chorus of voices is now dictating her thoughts.

How the Word is Passed, opens a new window by Clint Smith
Non-Fiction (History / Society and Culture)
Examines the legacy of slavery by highlighting the continued preservation of monuments and landmarks that hold violent and racist symbolism.

Invisible Child, opens a new window by Andrea Elliott
Non-Fiction (Society Culture / Biography)
This book follows eight dramatic years in the life of Dasani Coates, a child with an imagination as soaring as the skyscrapers near her Brooklyn homeless shelter.

On Juneteenth, opens a new window by Annette Gordon-Reed
Non-Fiction (History)
The essential, sweeping story of Juneteenth’s integral importance to American history, as told by a Pulitzer Prize-winning historian and Texas native.

Red Comet, opens a new window by Heather Clark
Non-Fiction (Biography)
An engrossing new biography of Sylvia Plath focuses on her remarkable literary and intellectual growth and achievement, restoring the vivid creative woman behind the longtime Plath myths perpetuated by a pathology-based approach to her life and art.

This list was selected by the editors of the Journal’s books pages and includes works of fiction and nonfiction. 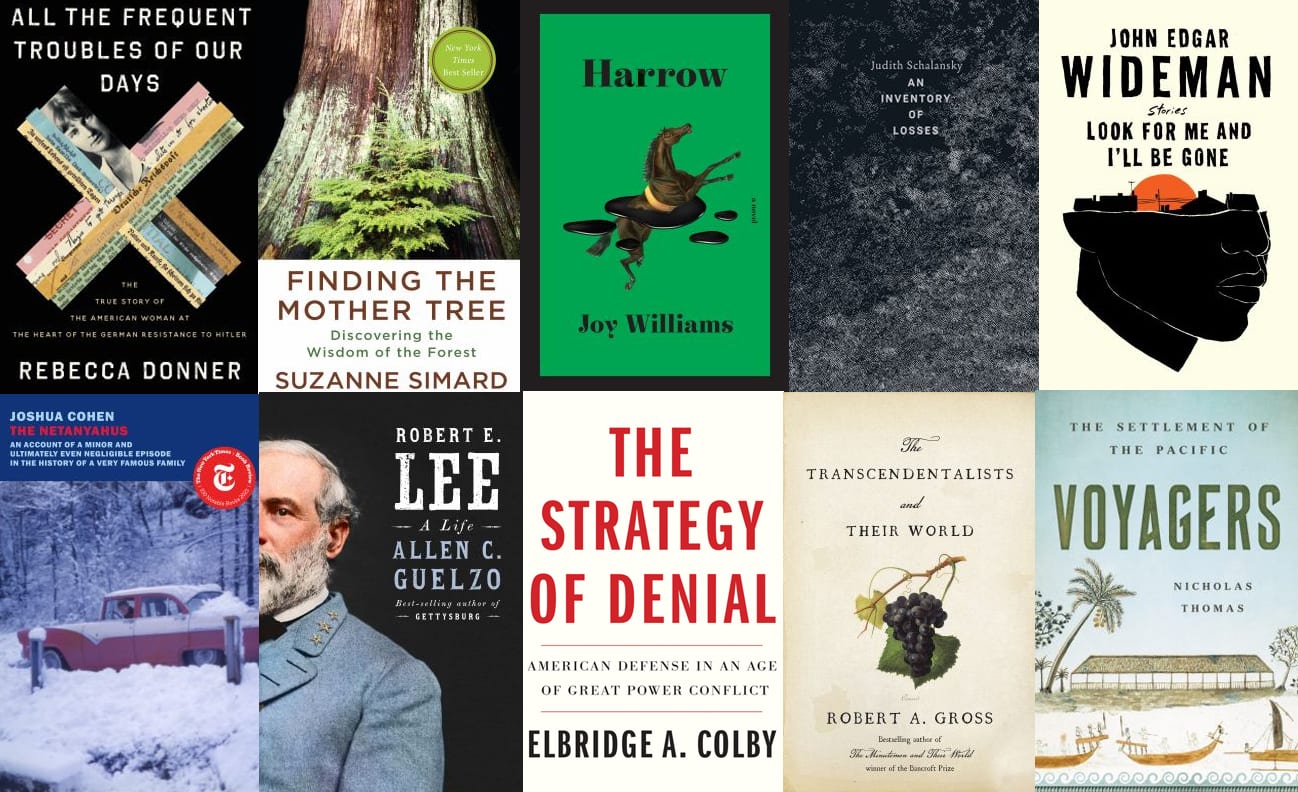 All the Frequent Troubles of Our Days, opens a new window by Rebecca Donner
Non-Fiction (History / Anti-Nazi Movements)
Part biography, part political thriller, part scholarly detective story that draws on letters, diary entries, notes smuggled out of a Berlin prison, and other documents, this true story chronicles the life and brutal death of Mildred Harnack, the American leader of one of the largest underground resistance groups in Germany.

Finding the Mother Tree, opens a new window by Suzanne Simard
Non-Fiction (Forest Conservation)
A personal and scientific work on trees, forests, and the author’s profound discoveries of tree communication.

Harrow, opens a new window by Joy Williams
Fiction – Fantasy
In her first novel since The Quick and the Dead, the legendary writer takes us into an uncertain landscape after the environmental apocalypse, a world in which only the man-made has value, but some still wish to salvage the authentic.

An Inventory of Losses, opens a new window by Judith Schalansky
Fiction
Each disparate object described in this book–a Caspar David Friedrich painting, a species of tiger, a villa in Rome, a Greek love poem, an island in the Pacific–shares a common fate: it no longer exists, except as the dead end of a paper trail.

Look for Me and I’ll Be Gone, opens a new window by John Edgar Wideman
Fiction – Short Stories
Forty years after John Edgar Wideman’s first collection of stories was published, he continues to produce new stories of the highest caliber and relevancy. Here, in his sixth story collection, he revisits themes that have infused his work for the duration of his career: family, loss, the penal system, Pittsburgh, physical and emotional life, art, and memory.

The Netanyahus, opens a new window by Joshua Cohen
Historical Fiction
The Netanyahus is a wildly inventive, genre-bending comedy of blending, identity, and politics– "An Account of A Minor and Ultimately Even Negligible Episode in the History of a Very Famous Family" that finds Joshua Cohen at the height of his powers.

Robert E. Lee, opens a new window by Allen Guelzo
Non-Fiction (Biography)
From the acclaimed author of Gettysburg: The Last Invasion–a sweeping, singularly immediate, and intimate biography of the Confederate general and his fateful decision to betray his nation in order to defend his home state and uphold the slave system he claimed to oppose.

The Strategy of Denial, opens a new window by Elbridge A. Colby
Non-Fiction (Politics / Military)
Elbridge A. Colby was the lead architect of the 2018 National Defense Strategy, the most significant revision of U.S. defense strategy in a generation. Here he lays out how America’s defense must change to address China’s growing power and ambition.

The Transcendentalists and Their World, opens a new window by Robert Gross
Non-Fiction (Transcendentalism)
The eminent and award-winning historian Robert A. Gross presents his long-awaited, immersive journey through Concord in the age of Emerson and Thoreau.

Voyagers, opens a new window by Nicholas Thomas
Non-Fiction
Drawing on the latest research, including insights gained from genetics, linguistics, and archaeology, Thomas provides a dazzling account of long-distance migrations, the seagoing technologies that enabled them, and the societies they left in their wake.

These were the magazine’s favorite titles that resurrected forgotten histories and help explain how the U.S. got to where it is today. 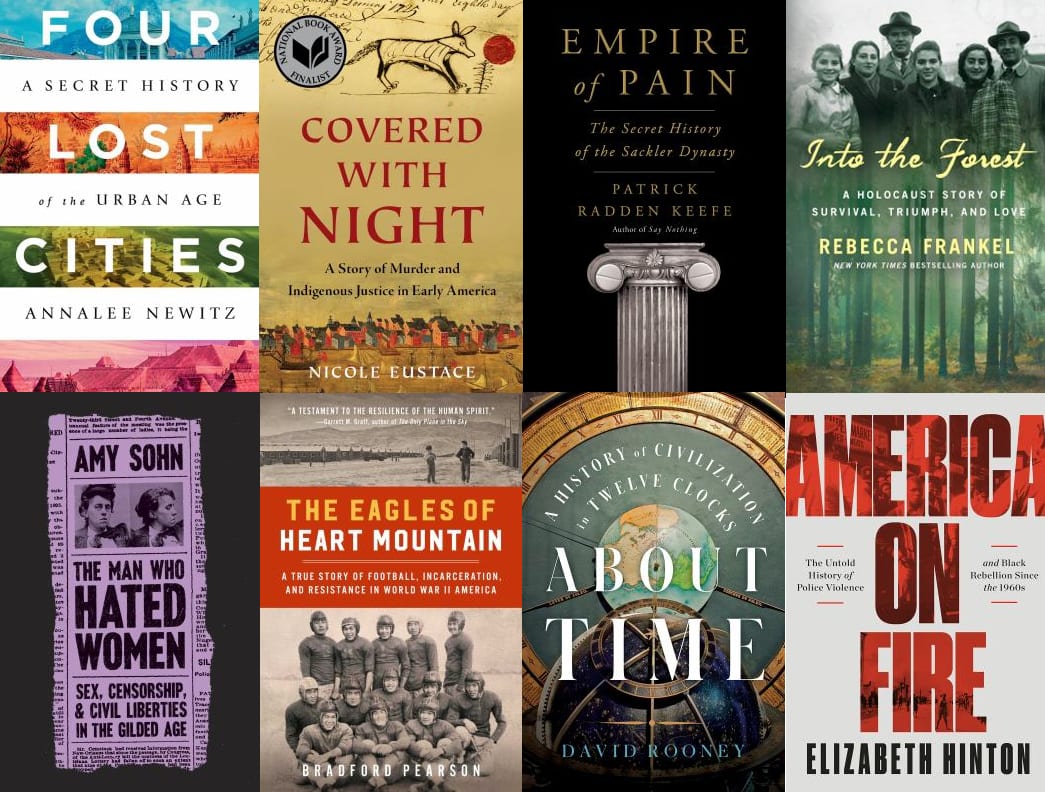 Four Lost Cities, opens a new window by Annalee Newitz
Non-Fiction (History)
Annalee Newitz takes readers on an adventure into the deep history of urban life. Investigating across the centuries and around the world, Newitz explores the rise and fall of four ancient cities.

Covered With Night, opens a new window by Nicole Eustace
Non-Fiction (History / Homicide Investigations)
An immersive tale of the killing of a Native American man and its far-reaching consequences for Colonial America. Eustace’s utterly absorbing account provides a new understanding of Indigenous forms of justice, with lessons for our era.

Empire of Pain, opens a new window by Patrick Keefe
Non-Fiction (Economics / True Crime)
The source of the family fortune was vague, however, until it emerged that the Sacklers were responsible for making and marketing OxyContin, a blockbuster painkiller that was a catalyst for the opioid crisis.

The Man Who Hated Women, opens a new window by Amy Sohn
Non-Fiction (History / Postal Inspectors)
A narrative history about Anthony Comstock, US Postal Inspector and vice hunter, and the remarkable women who opposed him.

About Time, opens a new window by David Rooney
Non-Fiction (Horology / History)
A captivating, surprising history of timekeeping and how it has shaped our world.

America on Fire, opens a new window by Elizabeth Hinton
Non-Fiction (History / Race Riots)
From one of our top historians, a groundbreaking story of policing and ‘riots’ that shatters our understanding of the post-civil rights era.