The most important part of creating a character for any tabletop roll playing game is choosing your race and class. These two factors will determine most of the abilities, skills, and spells you will use in game. More importantly, they will help you figure out who your character is and give you inspiration for their backstory.

For the 5th edition of Dungeons and Dragons there are 9 core races: Dragonborn, Dwarf, Elf, Gnome, Half-elf, Halfling, Half-orc, Human, and Tiefling. Each race in the world of D&D has different bonuses and abilities. If you’ve seen Lord of the Rings then you probably know what orcs, elves, and dwarves are, but let’s go over a couple of the lesser known races.

Dragonborn are part humanoid and part dragon, covered head-to-tow in scales, and are significantly bigger and stronger than humans

Tieflings are often seen as demons because of their sharp horns and tails, but they are actually humans from the lineage of the overlord of the Nine Hells and are fire resistant.

Choosing your class is the most fun and most important part of making a character. A class is not the same as a career, for example not all clerics are priest and not all rogues are thieves. Class determines the fundamental identity of who your character is. With so many classes, it can be hard to pick, but there are no wrong choices. Every class has its own unique advantages, and the only way to find the one that fits best for you is to play. Here is a brief overview of the 12 main classes in D&D 5th edition:

Fearsome fighters who can go into a rage to increase their strength and resilience.

Poets or musicians who use their skills to inspire the rest of their party with magical buffs or to hinder their opponents with discordant melodies.

These magic users channel the power of their deity to heal and support the rest of their party or to punish the wicked!

Druids have a deep connection to animals, plants, and elemental forces, and they use powerful magic to defend it.

The fighter class is great for beginner and seasoned players alike. They are rough and tumble and ready to fight!

Monks spend years training to harness the power of ki, the energy that flows through living bodies.

Paladins are called into adventure by their deities and sent to fight against evil using holy symbols and magically imbued weapons.

Rangers are very close to nature and often keep animal companions. They move stealthily through the wilderness to track monsters and beasts.

Rogues stick to the shadows and use their stealth and agility to assist their party.

A sorcerer’s specific type of magic is based on the arcane power of their bloodline.

These powerful magic users get their powers from a pact made with an otherworldlybeings.

Wizards aspire to learn more and become more powerful. As they continue their studies they will specialize in a certain type of magic. 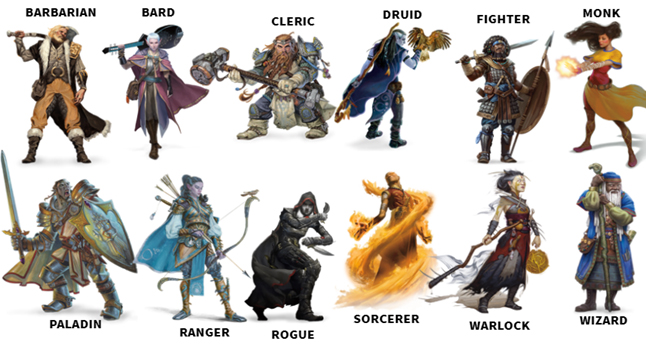